GOT KIDS? What Kind of Fool Am I? Part 4

The fool of Proverbs represents one who has made a deliberate choice to reject instruction and training. It is not the result of ignorance and so the fool is totally responsible for their actions. Yesterday I posted about the first level of the fool from the Hebrew terms translated as fool. Today I present the next two levels, the “wil” fool and the “nabal” fool.

The “wil” fool comes from the Hebrew that implies weak minded but is usually associated with being strong-willed and determined. The word picture would be bull-headed because they are stubborn in their rebellion. Some characteristics of this fool from Proverbs is that they make up their mind to do something but when asked why they did it, they may say they really did not have a good reason. Other characteristics are quarrelsome, they reveal themselves often by their speech, impatient to advice, and mock sin. (See 12:15-16; 14:9, 17:28, 20:3, 27:3, 29:9).

The third level of fool is the “nabal” fool. You may recognize this word by the name of Abigail’s husband in 1 Samuel 25 and where in verse 25, Abigail in attempting to prevent King David from responding to a fool in a foolis 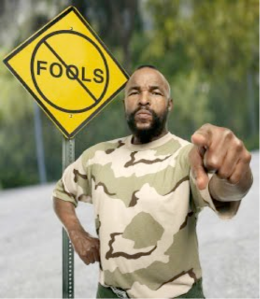 h way states, “Let not my lord regard this worthless fellow, Nabal, for as his name is, so he is. Nabal is his name and folly is with him.” The word implies being closed-minded or what is known as hard-hearted. This is the dangerous fool of Psalm 53:1 who says in their heart there is no God. In other words, they are functional atheists in their thinking and actions and have placed themselves in arrogance as sovereign in their life.

The danger of a fool at this point is they are near the final type of category of rebellion being the mocker or scoffer. As a fool, the “nabal” fool still falls into the category of hope with the rod of correction.

What we need to consider always with the rod of correction is that we often apply it based upon an outward behavior,  but its intention biblically is to reach the heart. The beauty of the gospel is that the rod God had for my sin was placed upon my Savior, Jesus Christ and he absorbed its blows for me. That set me free to find wisdom in him rather than in myself. The hope for the fool is Christ and though you can modify a fool’s behavior, only Christ can change their heart.

I am a follower of Jesus Christ; a husband to Deb; a father to Brit and her husband Bill and to Travis and his wife Megan, a grandfather to Simon, Thadd, Nathanael, Eli, Isaac, Ezra, Asa, and Xavier. I am currently serving as the Coordinator of Spiritual Development at Lincoln Christian School in Lincoln, Nebraska as well as the head wrestling coach and an assistant football coach.
View all posts by drivingthegospel »

Posted on May 3, 2013, in Foolishness, Parenting, Proverbs, Wisdom. Bookmark the permalink. Leave a comment.