Silence No Longer an Option

The following is a short article revealing the disturbing trend in the viewing of pornography. My immediate concern is working at a Christian school with several hundred young people.  Surveys of students (both boys and girls) indicate that some view it regularly, even here at school. We will address it to the students and offer help for those who ask, but smart phones don’t seem to be a smart thing at times (though the phone is not the problem but the heart is the issue) … George

Nearly 15 years ago, a survey found that Christians looked at pornography at nearly the same rates as non-believers. Have things improved?

In the spring of 2000, Zogby International asked more than a thousand U.S. adults whether they had ever visited a sexually-oriented web site. Only one in five had done so. Among born-again Christians, 18 percent had gone to such sites, just three percentage points less than the general public.

Well, fast forward to today. A group called Proven Men Ministries commissioned the Barna Group to examine current pornography use. You might want to sit down for this? Barna found that 64 percent of American men and 20 percent of women view pornography at least monthly. And for Christian men, that number is 55 percent.

Fourteen years ago, only one out of every three men had ever gone to a pornography site, but now nearly one-third of men under 30 do so on a daily basis. And if you think it can’t get worse, the survey found that 18 percent of men believe they may be addicted to pornography. That’s more than 20 million men in deep trouble.

Friends, take a moment to let this sink in. More than half of Christian men in America routinely expose themselves to sexually explicit lies that shape the way they see sex, love, marriage, and women. I don’t think it’s an overstatement to say that this is a crisis for the Church and certainly for our culture. If these numbers are accurate in any sense, and I believe they are, we’ve reached a time of reckoning.

One of the first things to realize is that rampant pornography use can’t be isolated from its larger cultural context. So many of our social ills stem from the fact that society is losing or abandoning the ability to see people as beings made in the image of God.

With crime, victims are treated as obstacles to overcome or things to exploit. Abortion sees people as disposable because he or she is inconvenient. Pornography treats people as objects in service of self-gratification. We’ve become this “use or be used” society.

And so, if we are to reclaim the sacred dignity of every human person amidst this brutish culture, we must turn inward. We’re all tempted to point angry fingers at those sinners “out there” that we think are degrading our culture. But even as Miley Cyrus flaunts herself on stage in front of millions, tens of millions of Christians are secretly watching pornography while their churches stay silent as tombs about the issue.

It may be that we in the church should revisit the story of the self-righteous Pharisee in Luke 18. If these survey results are true, we can no longer stand in the front of the church patting ourselves on the back for not being like those sexual sinners out there. Instead, together we can lower our face before God and say, “Have mercy on me, a sinner.”

Although this survey grieves me, I remain hopeful that through true evangelism and service, and by praying and seeking spiritual renewal in our churches, we have an incredible opportunity to reach out with the Good News of Jesus Christ to the hidden, the lost, and the ashamed. And right now, there are plenty of folks? millions even? waiting along the highways and byways for an invitation to the wedding feast of the Lamb. And invite them we must.

The Bible warns us many times that the sexually immoral will not inherit the Kingdom of Heaven. People’s eternal lives are at stake, including many who we call brother and sister each week in church.

A Prayer about Child-likeness and Jesus’ Love for Children

People were also bringing babies to Jesus for him to place his hands on them. When the disciples saw this, they rebuked them. But Jesus called the children to him and said, “Let the little children come to me, and do not hinder them, for the kingdom of God belongs to such as these. Truly I tell you, anyone who will not receive the kingdom of God like a little child will never enter it.” Luke 18:15-17

Dear Lord Jesus, this story is a blinking neon-sign of grace, gloriously declaring what a wonderful, merciful Savior you are. No one is so welcoming, kind-hearted or caring as you. It’s also a Scripture that underscores that, of all the ways we love children, the most important way we love them is by constantly bringing them to you. Whether they’re babies, teenagers, or adults themselves, it makes no difference. At every stage of life, our kids need you, Jesus, more than air, water and a tomorrow.

For our children who’ve yet to find life in you, have mercy on them and bring them to a saving knowledge of yourself, Jesus. They don’t just need to “grow up” and be responsible. They don’t need religion or a mature spirituality. They don’t need moral reform and a haircut. They need the gospel of your grace—they need you. Show them how much they need you, and show them how much you love them. Keep them restless until they rest in your complete forgiveness and perfect righteousness. More than we want Harvard for our children, we want heaven.

Jesus, some of us grieve the ways we’ve made the gospel less than beautiful and believable to our children. Forgive us, and show yourself to be the God who is limited by nothing, including parental self-righteousness. Transcend the ways we’ve blown it. But also grant us humility and grace to repent, first before you and then to them. Free us to give our children the gift of our repentance.

For our children who know you but currently seem to have waning or zero interest in you, or even ambivalence or antipathy toward you, hear our cry. Restore to them the joy of your salvation. Our confidence is in the our Father’s promise to bring to completion the good work he’s begun in each of us, but Jesus, we cannot afford to be either presumptuous or passive. Work powerfully. Work presently. Work persistently, we ask for your name’s sake. Give us patience with their doubts. Give us forbearance in their struggles. Give us grace to welcome prodigals home.

Lastly, Jesus, we ask you to restore us to the childlikeness of our early days of knowing you. Free us from childishness, indeed, but renew our hearts in childlike joy, playfulness, gratefulness, and simplicity. Our bodies and minds are getting older, but cause our hearts to dance, once again, in the utter and matchless delight of being loved by you. So very Amen we pray, in your tender and glorious name.

Don’t Pass The Garden Before You See The Cross

Each year during the time Resurrection Sunday approaches; I focus my devotional readings on books that speak of the suffering of Christ, his death and resurrection. The past few weeks I have been reading “The Cross He Bore” by Frederick Leahy and was particularly struck by the agony of Christ in the Garden of Gethsemane. Writing this on Thursday before Resurrection Sunday, where the traditional church remembers the garden events, I want to share a few of the thoughts that have gripped me. 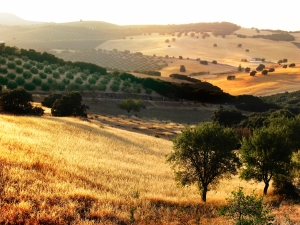 One is that the perfect obedience of Christ led him to the agony of the events at Gethsemane and then to Golgotha. This obedience called for self-restraint in the midst of great suffering as he would say, “Do you think that I cannot appeal to my Father, and he will at once send me more than twelve legions of angels? But how then should the Scriptures be fulfilled, that it must be so?” (Matthew 26:53, 54) Christ’s obedience would be such that he would not evade one thing that was necessary for him to accomplish our redemption; no matter the cost.

I have in the past tended to think that it was not until Jesus was on the cross that the Father separated himself from the Son. It seems though that the silence in Gethsemane to Jesus’ repeated prayers was an indication that the Father’s hands were already on the cup of wrath. Christ being stricken at that point and his anguish are evident in his prayers. And though the Father was depriving Christ of his presence, he was not unconcerned as with an outstretched hand, he did send an angel to him.

But, as Leahy states in his book, “The angel’s mission was not to bring relief to Christ, but to strengthen him for further and even greater anguish-anguish quite beyond human endurance. It was then our Lord ‘being in an agony-prayed more earnestly; and his sweat became like great drops of blood falling down to the ground’ (Luke 22:44). The angel’s presence served to aggravate his suffering. It was in order that the suffering might not only be maintained, but also that it might be intensified that the angel was sent. The battle must go on. It was too soon to say ‘Finished.’ The Lamb of God must have the strength of a lion in this struggle.

Death and the curse were in our cup.
O Christ, ‘twas full for Thee!
But Thou hast drained the last dark drop,
‘This empty now for me.
That bitter cup, love drank it up,
Now blessing’s draught for me.”

It makes me tremble when I consider the wrath of God, which was inflicted upon Jesus and my sin, which incurred such judgment. I am a debtor to God’s grace and mercy to me – a sinner saved by such a great Savior.

(“The Cross He Bore, Meditations on the Sufferings of the Redeemer,” by Frederick  S Leahy, The Banner of Truth Trust, 1996)

Posted in The Cross